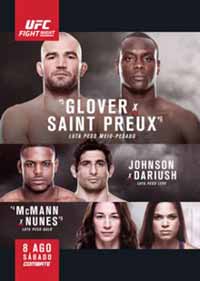 Review by AllTheBestFights.com: 2015-08-08, nice exchanges between Derek Brunson and Sam Alvey: it gets three stars.

Derek Brunson entered this fight with a mma record of 13-3-0 (69% finishing rate) and he is ranked as the No.20 middleweight in the world. He suffered his last defeat in 2014 when he faced Yoel Romero Palacio (=Romero vs Brunson), but then he came back to win beating Lorenz Larkin and Ed Herman.
His opponent, Sam Alvey, has an official record of 26-6-0 (73% finishing rate) and he entered as the No.25 in the same weight class. He lost in 2014 as well, against Tom Watson, but after this bout he has won three consecutive fights beating Daniel Kelly in his last one. Brunson vs Alvey is on the undercard of Glover Teixeira vs Ovince Saint Preux – UFC Fight Night 73. Watch the video and rate this fight!