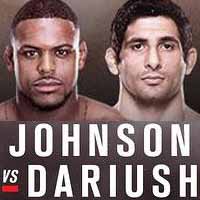 Review by AllTheBestFights.com: 2015-08-08, fight not particularly good between Michael Johnson and Beneil Dariush: it gets two stars.

Michael Johnson entered this fight with a pro mma record of 16-8-0 (56% finishing rate) and he is ranked as the No.7 lightweight in the world (currently the #1 in this division is Rafael dos Anjos). He lost two consecutive fights between 2012 and 2013, against Myles Jury and Reza Madadi (=Johnson vs Madadi), but then he has won four bouts beating Edson Barboza in his last one (=Barboza vs Johnson).
His opponent, the black belt in Brazilian jiu-jitsu Beneil Dariush, has a record of 11-1-0 (73% finishing rate) and he entered as the No.14 in the same weight class. He was defeated by Ramsey Nijem last year (=Dariush vs Nijem) but after this fight he has collected four victories winning over Jim Miller in his last bout. Johnson vs Dariush is on the undercard of Glover Teixeira vs Ovince Saint Preux – UFC Fight Night 73. Watch the video and rate this fight!