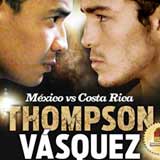 Review: 2014-12-20, some good exchanges between Sergio Thompson and Bryan Vasquez but it is not enough to get three stars. Sergio Thompson entered this fight with a pro boxing record of 30-3-0 (26 KOs=86%) and he is ranked as the No.14 super featherweight in the world, he suffered his last defeat in 2013 when he faced Takashi Miura in a fight valid for the Wbc world title (=Miura vs Thompson); after this bout he won three consecutive fights, the last one against Adones Aguelo (=Thompson vs Aguelo).
His opponent, Bryan Vasquez, has a record of 33-1-0 (17 knockouts) and he entered as the No.16 in the same weight class, his only loss occurred in 2012, against the undefeated Takashi Uchiyama (=Uchiyama vs Vasquez); since then he has won four bouts, the last one against Jose Felix Jr. ‘Yeyo’ Thompson vs Vasquez is valid for the interim WBA World super featherweight title but just for Thomspon since Vasquez failed to make the 130 lbs weight limit. Watch the video and rate this fight!