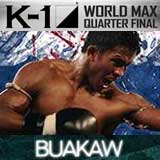 Review: 2013-12-28, great performance by both fighters with some tough exchanges: Buakaw Banchamek vs Zhi-Peng Zhou gets three stars. Buakaw Banchamek, formerly known as Buakaw Por Pramuk, ranked as the No.2 super welterweight in the world, entered the fight with a record of 212-21-12 (unfortunately we haven’t found the professional record of Zhi-Peng Zhou). Buakaw vs Zhou, main event of the evening, is the quarterfinal of K-1 MAX 2013 world championship tournament. Watch the video!