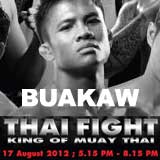 Review: 2012-08-17, the fight between Buakaw Por Pramuk and Abdoul Toure gets three stars only for the good knockout in the second round. Buakaw Por Pramuk ranked as the No.2 super welterweight in the world, entered the fight with a record of 204-21-12 while Abdoul Toure had a record of 22-7-0. Buakaw vs Toure is the main event of Thai Fight Extreme 2012 – England. Watch the video!