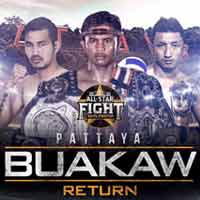 Review by AllTheBestFights.com: 2018-11-04, nice and tough exchanges between Buakaw Banchamek and Gaetan Dambo: it gets three stars.