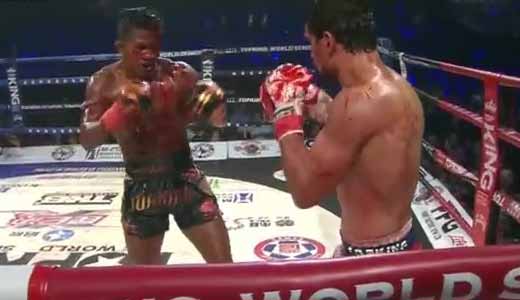 Review by AllTheBestFights.com: 2015-07-28, exciting and tough fight thanks to some brutal exchanges and spectacular elbows: Buakaw Banchamek vs Khayal Dzhaniev is one of the best muay thai fights of 2015 and it gets four stars!

The two time K-1 World MAX champion Buakaw Banchamek, formerly known as Buakaw Por Pramuk, entered this fight with a professional kickboxing record of 264-42-12 (68 knockouts) and he is ranked as the No.5 super welterweight in the world while his opponent, Khayal Dzhaniev, has an official record of 10-2-0 and he entered as the No.12 welterweight. Buakaw suffered his last defeat in 2014 when he faced Enriko Kehl in the final of the K-1 World MAX (controversial ending, Buakaw vs Kehl 2) but after this bout he has won five consecutive fights beating Artem Pashporin in his last one (=Buakaw vs Pashporin). Buakaw vs Dzhaniev is the semifinal of the TopKing World Series 70kg tournament. Watch the video and rate this fight!