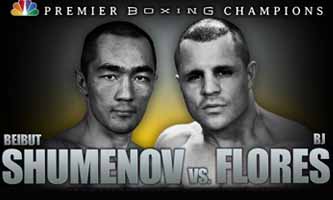 Review by AllTheBestFights.com: 2015-07-25, some good single shots between Beibut Shumenov and BJ Flores but it is not enough to get three stars: it gets two.

Beibut Shumenov entered this fight with a boxing record of 15-2-0 (10 knockouts) and he is ranked as the No.19 cruiserweight in the world. He fought twice last year losing to Bernard Hopkins (=Hopkins vs Shumenov) and winning over Bobby Thomas Jr.
His opponent, BJ Flores, has an official record of 31-1-1 (20 knockouts) and he entered as the No.29 in the same weight class. His only loss occurred in 2010 when he faced Danny Green, since then he has won seven consecutive fights beating Kevin Engel in his last one. Shumenov vs Flores is valid for the interim WBA World cruiserweight title. Watch the video and rate this fight!