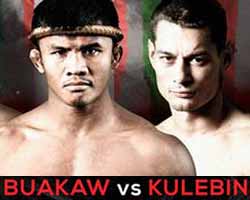 Review by AllTheBestFights.com: 2016-12-10, fight not particularly good between Buakaw Banchamek and Andrei Kulebin: it gets two stars.

The two time K-1 World MAX champion Buakaw Banchamek, formerly known as Buakaw Por Pramuk, entered this fight with a professional kickboxing record of 269-44-12 (70 knockouts) and he is ranked as the No.7 super welterweight in the world. He has already fought five times in 2016 beating Dylan Salvador in September (=Buakaw vs Salvador) but then he lost the rematch with Yi Long in November (controversial decision, Buakaw vs Yi Long 2).
His opponent, the former WKN and WMC world champion Andrei Kulebin, has an official record of 65-20-0 (14 knockouts) and he entered as the No.11 welterweight but he comes off two consecutive losses, against Tian Xin and Fabio Pinca. Buakaw vs Kulebin is the main event of Phoenix ONE – Phoenix Fighting Championship. Watch the video and rate this fight!