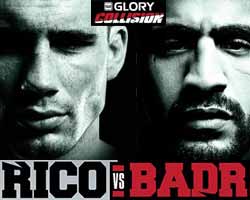 Review by AllTheBestFights.com: 2016-12-10, disappointing fight between Rico Verhoeven and Badr Hari: it gets two stars.

The Glory Hw champion Rico Verhoeven entered this fight with a kickboxing record of 49-10-1 (13 knockouts) and he is ranked as the No.1 heavyweight in the world. He lost to Andrei Herasimchuk last year (=Verhoeven vs Herasimchuk) but then he has won five consecutive fights beating Mladen Brestovac (=Verhoeven vs Brestovac) and Anderson Braddock Silva in 2016 (= Verhoeven vs Silva).
His opponent, the former K-1 world champion Badr Hari, has an official record of 106-12-0 (94 KOs=89%) but he is not ranked as he hasn’t fought since August 22, 2015 when he defeated Ismael Londt (=Hari vs Londt). His last loss occurred when he faced Zabit Samedov in 2013 (=Hari vs Samedov 3). Verhoeven vs Hari is the main event of Glory 36 Collision; they also faced each other a second time on December 21, 2019 (Rico Verhoeven vs Badr Hari 2). Watch the video and rate this fight!