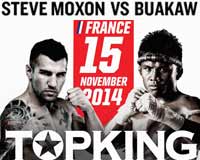 Review: 2014-11-15, pretty good fight between Buakaw Banchamek and Steve Moxon: it gets three stars. Buakaw Banchamek, formerly known as Buakaw Por Pramuk, entered this fight with a professional kickboxing record of 219-22-12 (57 knockouts) and he is ranked as the No.4 super welterweight in the world, he has already fought seven times in 2014 winning six bouts and the WBC muay thai world title, against Abdoul Toure (=Buakaw vs Toure 2), but he lost his last fight, the final of the K-1 World MAX 2014, against Enriko Kehl (but it was a controversial ending since the fight ended in a draw after three rounds and Buakaw walked out because he didn’t accept the decision or because he thought the result was fixed for gambling reason, so he didn’t fight the fourth round and Kehl was declared the winner, Buakaw vs Kehl 2).
His opponent, Steve Moxon, has an official record of 37-9-1 (22 knockouts) and he entered as the No.14 in the same weight class, he has fought four times in 2014 losing twice, against Niclas Larsen and Dzhabar Askerov, and winning against Brad Riddell and Marco Tentori. Buakaw vs Moxon is the main event of “Top King World Series II”. Watch the video and rate this fight!