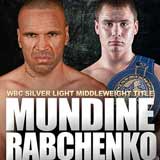 Review: 2014-11-12, pretty good fight between Anthony Mundine and Sergey Rabchenko: it gets three stars. The 39-year-old Anthony Mundine (eleven years older than Rabchenko) entered this fight with a professional boxing record of 32-2-0 (27 knockouts) and he is ranked as the No.18 light middleweight in the world while his opponent, the undefeated Sergey Rabchenko, has a perfect record of 25-0-0 (18 knockouts) and he entered as the No.14 in the same weight class. Mundine has fought twice in 2014 beating Gunnar Jackson but then he was defeated by Joshua Clottey (=Mundine vs Clottey) while Rabchenko’s last bout was at the end of 2013 when he faced Bradley Pryce. Mundine vs Rabchenko is valid for the WBC Silver light middleweight title (Rabchenko’s second defense). Watch the video and rate this fight!