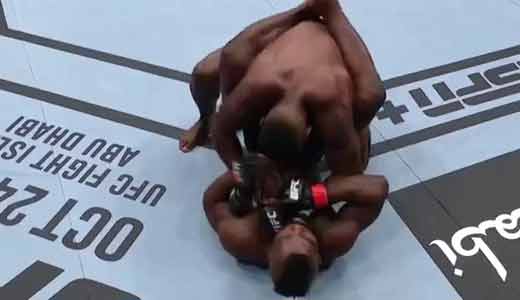 Review by AllTheBestFights.com: 2020-10-11, spectacular finish between Impa Kasanganay and Joaquin Buckley: this is one of the best mma fights of 2020 and it gets four stars (UFC Performance of the Night). Moreover this match was ranked in the ‘Top 10 Mma Fights of the Year 2020‘ (ranking generated by our users).
The undefeatead Impa Kasanganay entered this fight with a perfect mma record of 8-0-0 (25% submission victory rate – he has never won via ko/tko) and he is ranked as the No.104 middleweight in the world. In his last three bouts he has won over Kailan Hill, Anthony Adams and Maki Pitolo.
His opponent, Joaquin Buckley, has an official record of 10-3-0 (70% finishing rate) and he entered as the No.135 in the same weight class. He has already fought twice in 2020 beating Jackie Gosh and losing to Kevin Holland. Buckley vs Kasanganay is on the undercard of Marlon Moraes vs Cory Sandhagen – UFC Fight Night 179 (also known as UFC on ESPN+ 37 or UFC Fight Island 5). Watch the video and rate this fight!