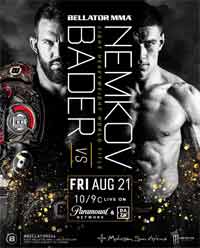 Review by AllTheBestFights.com: 2020-08-21, disappointing fight between Julia Budd and Jessy Miele: it gets two stars.
The former Bellator Fw champion Julia Budd entered this fight with a pro mma record of 13-3-0 (54% finishing rate) and she is ranked as the No.4 women’s featherweight in the world but she comes off the loss against Cris Cyborg Justino (Julia Budd vs Cris Cyborg Justino); before this bout, in 2019, she had beat Olga Rubin (Julia Budd vs Olga Rubin).
Her opponent, Jessica Miele, has an official record of 9-3-0 (67% finishing rate) and she entered as the No.15 in the same weight class. She lost to Charmaine Tweet in 2016 but then she has won four consecutive bouts defeating Elizabeth Phillips and Talita Nogueira in her last two. Miele vs Budd is on the undercard of Ryan Bader vs Vadim Nemkov – Bellator 244. Watch the video and rate this fight!