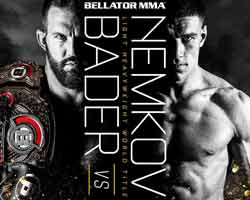 Review by AllTheBestFights.com: 2020-08-21, good fight between Ryan Bader and Vadim Nemkov: it gets three stars.
The current Bellator Hw, light-Hw champion and Tuf 8 tournament winner Ryan Bader entered this fight with a professional mma record of 27-5-0 (55% finishing rate) and he is ranked as the No.2 light heavyweight in the world (currently the #1 in this division is Jon Jones). He suffered his last loss when he faced Anthony Johnson in 2016 (Johnson vs Bader) since then he has won seven fights defeating Matt Mitrione (Ryan Bader vs Matt Mitrione) and Fedor Emelianenko in his last two (Fedor Emelianenko vs Ryan Bader); after this bout he has also faced Cheick Kongo but the bout ended in a no-contest (Ryan Bader vs Cheick Kongo).
His opponent, the four time Combat Sambo world champ Vadim Nemkov, has an official record of 11-2-0 (91% finishing rate) and he entered as the No.6 in the same weight class. He suffered two losses between 2015 and 2016, against Jiri Prochazka (Jiri Prochazka vs Vadim Nemkov) and Karl Albrektsson, but then he has won six bouts beating Phil Davis (Phil Davis vs Vadim Nemkov) and Rafael Carvalho in his last two (Rafael Carvalho vs Vadim Nemkov). Nemkov vs Bader, main event of Bellator 244, is valid for the Bellator light heavyweight title. Watch the video and rate this fight!