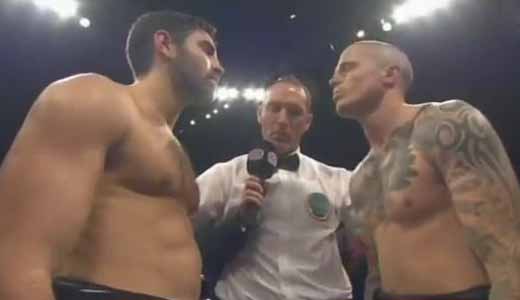 Review by AllTheBestFights.com: 2015-05-09, close and very exciting toe-to-toe fight thanks to an amazing performance by both boxers: Frank Buglioni vs Lee Markham is one of the best boxing fights of 2015 and it gets four stars!

Frank Buglioni entered this fight with a professional boxing record of 16-1-0 (12 KOs=75%) and he is ranked as the No.51 super middleweight in the world. He suffered his only defeat in 2014, against Sergey Khomitsky (=Buglioni vs Khomitsky), but after this bout he has won four consecutive fights, the last one with Ivan Jukic.
His opponent, Lee Markham, has an official record of 14-2-0 (7 knockouts) and he entered as the No.95 in the same weight class; he has already fought twice in 2015 beating Lewis van Poetsch but then he lost to Jahmaine Smyle. Buglioni vs Markham is valid for the WBO European super middleweight title (Buglioni’s second defense). Watch the video and rate this fight!