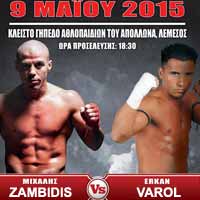 Review by AllTheBestFights.com: 2015-05-09, pretty good finish but the rest of the fight was not so exciting: Mike Zambidis vs Erkan Varol gets two stars.

Mike Zambidis entered this fight with a professional kickboxing record of 154-22-0 (87 knockouts) but he suffered two consecutive defeats in 2014, against Xu Yan (=Zambidis vs Xu Yan) and Batu Khasikov (=Zambidis vs Khasikov 2). After losing he came back to win in 2015 with Harun Kina (=Zambidis vs Kina 2).
His opponent, Erkan Varol, has an official record of 86-15-0 (45 knockouts) but he won just one out of his last six bouts, against Reyad Hamza. In his last two fights Varol lost to Giorgio Petrosyan (=Petrosyan vs Varol) and Enriko Kehl (=Kehl vs Varol 2). Zambidis vs Varol is the main event of Iron Challenge 2015 Cyprus. Watch the video and rate this fight!