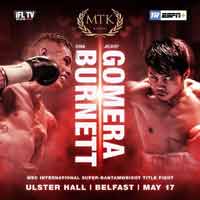 Review by AllTheBestFights.com: 2019-05-17, some good exchanges between Ryan Burnett and Jelbirt Gomera but it is not enough to get three stars: it gets two.

The former Ibf and Wba Bw champion Ryan Burnett entered this fight with a pro boxing record of 19-1-0 (9 knockouts) and he is ranked as the No.7 bantamweight in the world (currently the #1 in this division is Luis Nery). He comes off his only “defeat” (he had a back injury and he had to retire) suffered against Nonito Donaire in November 2018 (Ryan Burnett vs Nonito Donaire); before this bout, in March, he had beat Yonfrez Parejo (Ryan Burnett vs Yonfrez Parejo).
His opponent, Jelbirt Gomera, has a record of 14-5-0 (7 knockouts) and he entered as the No.175 featherweight. He also fought twice last year, losing against Can Xu and defeating Lloyd Jardeliza. Burnett vs Gomera is valid for the vacant WBC International super bantamweight title. Watch the video and rate this fight!