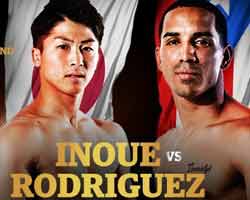 Review by AllTheBestFights.com: 2019-05-18, nice and tough exchanges between Naoya Inoue and Emmanuel Rodriguez: it gets three stars.

Both undefeated, the world champion in three different weight classes Naoya Inoue entered this fight with a perfect record of 17-0-0 (15 KOs=88%) and he is ranked as the No.2 bantamweight in the world (currently the #1 in this division is Luis Nery) while his opponent, the Ibf Bw champ Emmanuel Rodriguez, has a boxing record of 19-0-0 (12 knockouts) and he entered as the No.8 in the same weight class. In their last three bouts ‘Monster’ Inoue has won over Yoan Boyeaux (Naoya Inoue vs Yoan Boyeaux), Jamie McDonnell (Jamie McDonnell vs Naoya Inoue) and Juan Carlos Payano (Naoya Inoue vs Juan Carlos Payano) while ‘Manny’ Rodriguez has beat Giovanni Delgado, Paul Butler (Paul Butler vs Emmanuel Rodriguez) and Jason Moloney (Emmanuel Rodriguez vs Jason Moloney). Inoue vs Rodriguez is the semi-final of the World Boxing Super Series bantamweight tournament (WBSS – Muhammad Ali Trophy) and it is valid for the IBF and WBA World bantamweight titles; undercard of Josh Taylor vs Ivan Baranchyk. Watch the video and rate this fight!