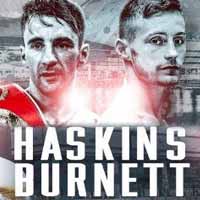 Review by AllTheBestFights.com: 2017-06-10, some good exchanges between Lee Haskins and Ryan Burnett but it is not enough to get three stars: it gets two.

The Ibf Bw champion Lee Haskins entered this fight with a boxing record of 34-3-0 (14 knockouts) and he is ranked as the No.4 bantamweight in the world (currently the #1 in this division is Shinsuke Yamanaka). He suffered his last loss when he faced Stephane Jamoye in 2012 (=Haskins vs Jamoye), since then he has won eight consecutive fights beating Ivan Morales (=Haskins vs Morales) and Stuart Hall in 2016 (=Haskins vs Hall 2).
His opponent, the undefeated Ryan Burnett, has a perfect record of 16-0-0 (9 knockouts) and he entered as the No.24 in the same weight class. Between 2016 and 2017 he won over Anthony Settoul, Cesar Ramirez, Ryan Farrag and Joseafat Reyes. Ryan Burnett vs Lee Haskins is valid for the IBF World bantamweight title (Haskins’ third defense). Watch the video and rate this fight!