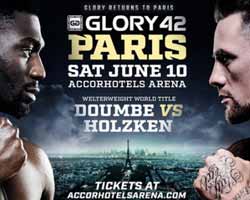 The Glory Ww and WAKO Pro Mw champion Cedric Doumbe entered this fight with a pro kickboxing record of 66-5-1 (39 knockouts) and he is ranked as the No.1 super middleweight in the world. He lost to Fang Bian at the beginning of 2016 but then he has won ten consecutive fights beating Nieky Holzken (=Holzken vs Doumbe I) and Yoann Kongolo in his last two (=Doumbe vs Kongolo 3).
His opponent, the former Glory Ww champion Nieky Holzken, has a record of 90-12-0 (56 knockouts) and he entered as the No.3 in the same weight class. Before losing to Doumbe last year, he had won over Yoann Kongolo in April (=Holzken vs Kongolo) and Murthel Groenhart in October (=Holzken vs Groenhart 3). Cedric Doumbe vs Nieky Holzken 2, main event of Glory 42, is valid for the Glory welterweight title (Doumbe’s second defense). Watch the video and rate this fight!