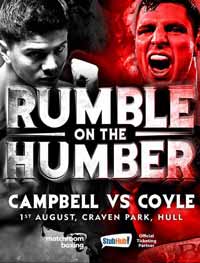 Review by AllTheBestFights.com: 2015-08-01, fight not particularly good between Ricky Burns and Prince Ofotsu: it gets two stars.

The former Wbo super-Fw and Lw champion Ricky Burns entered this fight with a boxing record of 37-5-1 (11 knockouts) and he is ranked as the No.24 lightweight in the world while his opponent, Prince Ofotsu, has an official record of 15-4-0 (11 knockouts) but he is not ranked as he hasn’t fought since December 26, 2013 when he was defeated by Richard Commey. Burns has already fought once in 2015 losing to Omar Figueroa Jr (=Figueroa vs Burns). Burns vs Ofotsu is on the undercard of Tommy Coyle vs Luke Campbell . Watch the video and rate this fight!