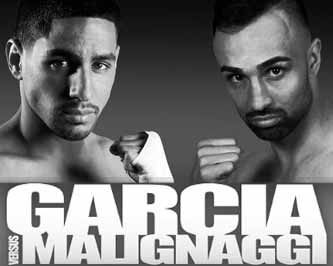 Review by AllTheBestFights.com: 2015-08-01, fight not particularly exciting between Danny Garcia and Paul Malignaggi: it gets two stars.

The undefeated Wbc and Wba light-Ww champion Danny Garcia entered this fight with a perfect boxing record of 30-0-0 (17 knockouts) and he is ranked as the No.2 super lightweight in the world (currently the #1 in this division is Terence Crawford). He has defeated Rod Salka (=Garcia vs Salka) and Lamont Peterson in his last two bouts (=Garcia vs Peterson).
His opponent, the former world champion in two different weight classes Paul Malignaggi, has an official record of 33-6-0 (7 knockouts) but he is not ranked as he hasn’t fought since April 19, 2014 when he was defeated by Shawn Porter (=Porter vs Malignaggi). Garcia vs Malignaggi is the main event of the evening. Watch the video and rate this fight!