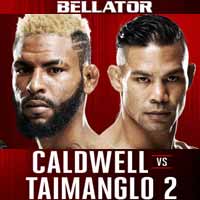 Review by AllTheBestFights.com: 2016-12-03, disappointing fight between Darrion Caldwell and Joe Taimanglo 2: it gets two stars.

Joe Taimanglo entered this fight with a record of 23-6-1 (74% finishing rate) and he is ranked as the No.11 bantamweight in the world while his opponent, Darrion Caldwell, has a record of 9-1-0 (56% finishing rate) and he entered as the No.17 in the same weight class. In their first fight Caldwell has lost to Taimanglo (July 22, 2016 Caldwell vs Taimanglo I) while Joe’s last defeat occurred in 2014 against Rob Emerson; after this fight he has won four consecutive bouts beating also Sirwan Kakai in 2016 (=Taimanglo vs Kakai). Taimanglo vs Caldwell 2 is the main event of Bellator 167. Watch the video and rate this fight!

Their previous fight: Darrion Caldwell vs Joe Taimanglo I