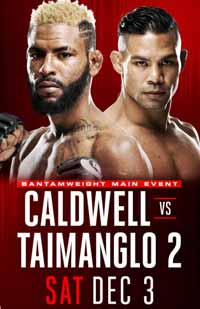 Review by AllTheBestFights.com: 2016-12-03, fight not so exciting between Justin Lawrence and John Teixeira da Conceicao: it gets two stars.

The black belt in karate Justin Lawrence entered this fight with a professional mma record of 9-3-0 (56% finishing rate) and he is ranked as the No.41 featherweight in the world. He lost to Emmanuel Sanchez last year (=Lawrence vs Sanchez) but he came back to win against Isao Kobayashi in 2016.
His opponent, the black belt in Brazilian jiu-jitsu John Teixeira da Conceicao, has an official record of 20-1-2 (70% finishing rate) and he entered as the No.36 in the same weight class. ‘Macapa’ Teixeira suffered his last loss when he faced Hugo Viana in 2012, since then he has collected seven wins and one draw. Lawrence vs Teixeira is on the undercard of Joe Taimanglo vs Darrion Caldwell 2 – Bellator 167. Watch the video and rate this fight!

Video: (Free embeddable video hosted on ok.ru and not uploaded by AllTheBestFights, to report it please visit this link where the video is hosted)