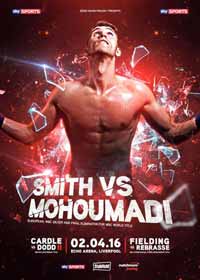 Review by AllTheBestFights.com: 2016-04-02, aggressive start between Callum Smith and Hadillah Mohoumadi it gets three stars.

The undefeated Callum Smith entered this fight with a perfect record of 18-0-0 (13 knockouts) and he is ranked as the No.3 super middleweight in the world (currently the #1 in this division is Arthur Abraham). He fought three times last year beating Olegs Fedotovs, Christopher Rebrasse (=Smith vs Rebrasse) and Rocky Fielding (=Smith vs Fielding).
His opponent, Hadillah Mohoumadi, has an official boxing record of 20-3-1 (15 KOs=75%) and he entered as the No.31 in the same weight class. He lost two consecutive bouts in 2012, against Nikola Sjekloca and James DeGale (=DeGale vs Mohoumadi), after this bout he has won six fights. Smith vs Mohoumadi is valid for the EBU (European) super middleweight title. Watch the video and rate this fight!