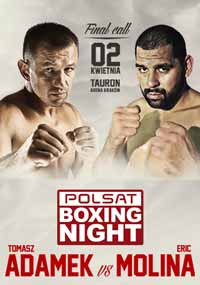 Review by AllTheBestFights.com: 2016-04-02, Tomasz Adamek vs Eric Molina gets three stars only thanks to a good finish.

The former world champion in two different weight classes Tomasz Adamek entered this fight with a pro record of 50-4-0 (30 knockouts) and he is ranked as the No.21 heavyweight in the world. He lost two consecutive bouts in 2014, against Vyacheslav Glazkov (=Adamek vs Glazkov) and Artur Szpilka (=Adamek vs Szpilka), but then he came back to win in 2015 with Przemyslaw Saleta (=Adamek vs Saleta).
His opponent, Eric Molina, has a boxing record of 24-3-0 (18 KOs=75%) and he entered as the No.44 in the same weight class. He lost to Deontay Wilder last year (=Wilder vs Molina) but then he won against Rodricka Ray. Adamek vs Molina is valid for the vacant IBF Inter-Continental heavyweight title. Watch the video and rate this fight!