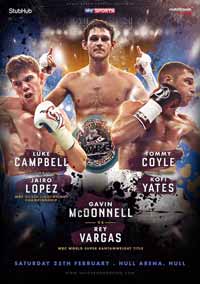 Review by AllTheBestFights.com: 2017-02-25, great start between Luke Campbell and Jairo Lopez: it gets three tsars.

The 2012 Olympic bantamweight gold medalist Luke Campbell entered this fight with a pro record of 15-1-0 (12 KOs=80%) and he is ranked as the No.5 lightweight in the world (currently the #1 in this division is Robert Easter Jr). He suffered his only loss when he faced Yvan Mendy at the end of 2015 (=Campbell vs Mendy), after this fight he has won over Gary Sykes (=Campbell vs Sykes), Argenis Mendez (=Campbell vs Mendez) and Derry Mathews (=Campbell vs Mathews).
His opponent, Jairo Lopez, has an official boxing record of 21-6-0 (14 knockouts) and he entered as the No.45 in the same weight class. He lost three consecutive bouts between 2015 and 2016 but then he has beat Edgar Puerta (twice) and Sergio Puente. Luke Campbell vs Jairo Lopez is valid for the WBC Silver lightweight title; undercard of Rey Vargas vs Gavin McDonnell. Watch the video and rate this fight!