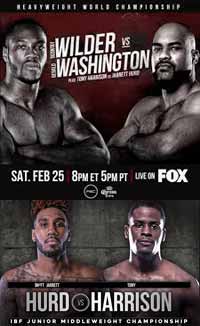 Review by AllTheBestFights.com: 2017-02-25, exciting back and forth fight: Dominic Breazeale vs Izuagbe Ugonoh is close to get four stars!

Dominic Breazeale entered this fight with a pro boxing record of 17-1-0 (15 KOs=88%) and he is ranked as the No.15 heavyweight in the world. He fought twice last year beating Amir Mansour (=Mansour vs Breazeale) and losing to #1 Hw Anthony Joshua (=Joshua vs Breazeale).
His opponent, the undefeated Izuagbe Ugonoh, has a perfect record of 17-0-0 (14 KOs=82%) and he entered as the No.36 in the same weight class. He also fought twice in 2016 winning over Ricardo Humberto Ramirez and Gregory Tony. Dominic Breazeale vs Izuagbe Ugonoh is on the undercard of Deontay Wilder vs Gerald Washington. Watch the video and rate this fight!