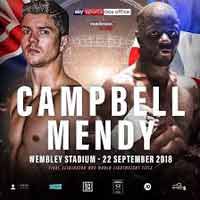 Review by AllTheBestFights.com: 2018-09-22, some good exchanges between Luke Campbell and Yvan Mendy 2 but it is not enough to get three stars: it gets two.

The 2012 Olympic bantamweight gold medalist Luke Campbell entered this fight with a professional record of 18-2-0 (15 KOs=83%) and he is ranked as the No.5 lightweight in the world (currently the #1 in this division is Vasyl Lomachenko). He lost to Jorge Linares last year (Jorge Linares vs Luke Campbell) but he came back to win in 2018 against Troy James.
His opponent, Yvan Mendy, has a boxing record of 40-4-1 (19 knockouts) and he entered as the No.22 in the same weight class. He suffered his last loss when he faced Edis Tatli in 2015 (Edis Tatli vs Yvan Mendy), since then he has won ten consecutive bouts defeating Jesus Arevalo in his last one (Yvan Mendy vs Jesus Arevalo). In their firs fight Campbell was defeated by Mendy via split decision (Luke Campbell vs Yvan Mendy I); this second bout, WBC lightweight world title final eliminator, is on the undercard of Anthony Joshua vs Alexander Povetkin. Watch the video and rate this fight!

(Free embeddable video hosted on Dailymotion and not uploaded by AllTheBestFights)
https://www.dailymotion.com/video/x6u2mna