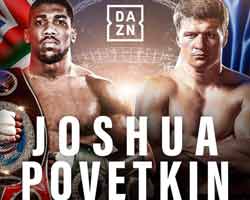 Review by AllTheBestFights.com: 2018-09-22, good fight between Anthony Joshua and Alexander Povetkin: it gets three stars.

The 2012 Olympic super heavyweight gold medalist and current IBF, IBO, WBO and WBA world champion Anthony Joshua entered this fight with a perfect boxing record of 21-0-0 (20 KOs=95%) and he is ranked as the No.1 heavyweight in the world. In his last three bouts AJ has defeated Wladimir Klitschko (Joshua vs Klitschko), Carlos Takam (Anthony Joshua vs Carlos Takam) and Joseph Parker (Anthony Joshua vs Joseph Parker).
His opponent, the 2004 Olympic super-heavyweight gold medalist and former Wba Hw champion Alexander Povetkin, has an official record of 34-1-0 (24 knockouts) and he entered as the No.3 in the same weight class. He suffered his only loss when he faced Wladimir Klitschko in 2013 (Klitschko vs Povetkin), since then he has won eight bouts beating Andriy Rudenko (Povetkin vs Rudenko), Christian Hammer (Alexander Povetkin vs Christian Hammer) and David Price in his last three (Alexander Povetkin vs David Price). Joshua vs Povetkin is valid for the IBF, IBO, WBA, WBO World heavyweight titles. Watch the video and rate this fight!