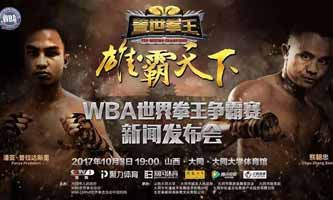 Review by AllTheBestFights.com: 2017-10-03, pretty good fight between Can Xu and Nehomar Cermeno: it gets three stars.

Can Xu entered this fight with a pro boxing record of 12-2-0 (0 knockouts) and he is ranked as the No.22 super featherweight in the world. He suffered his last defeat when he faced Bao Dong in 2014, since then he has won nine consecutive bouts beating Jack Asis in 2017.
His opponent, the former Wba super-Bw champion Nehomar Cermeno, has a record of 26-6-1 (15 knockouts) and he entered as the No.25 super bantamweight but he comes off the loss against Shun Kubo (=Cermeno vs Kubo). Can Xu vs Nehomar Cermeno is valid for the vacant WBA International featherweight title; undercard of Xiong Zhao Zhong vs Petchmanee Kokietgym. Watch the video and rate this fight!

Result: Click here to show the fight’s result
Can Xu def. Nehomar Cermeno (Retirement at 3:00, round 7)

Can Xu vs Cermeno Fight Video:

(Free embeddable video hosted on Youku.com and not uploaded by AllTheBestFights)