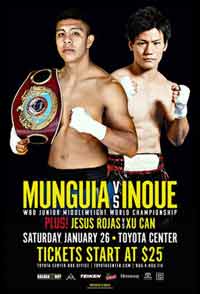 Review by AllTheBestFights.com: 2019-01-26, good fight between Jesus M Rojas and Can Xu: it gets three stars.

The former Wba Fw champ Jesus M Rojas entered this fight with a record of 26-2-2 (19 knockouts) and he is ranked as the No.16 featherweight in the world but he comes off the loss against Joseph Diaz (Joseph Diaz vs Jesus M Rojas); before this bout, in 2017, he had beat Abraham Lopez and Claudio Marrero (Claudio Marrero vs Jesus M Rojas).
His opponent, Can Xu, has a boxing record of 15-2-0 (2 knockouts) and he entered as the No.14 in the same weight class. He was defeated by Bao Dong in 2014 but since then he has won 12 consecutive fights beating Nehomar Cermeno (Can Xu vs Nehomar Cermeno), Jelbirt Gomera and Enrique Bernache in his last three. Rojas vs Xu is valid for the WBA World featherweight title; undercard of Jaime Munguia vs Takeshi Inoue. Watch the video and rate this fight!

Can Xu’s next fight: Can Xu vs Shun Kubo