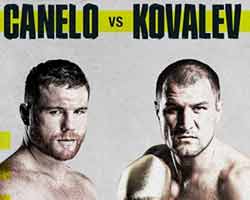 Review by AllTheBestFights.com: 2019-11-02, Saul Alvarez vs Sergey Kovalev gets three stars thanks to a good finish.

The world champion in three different weight classes Saul Canelo Alvarez entered this fight with a professional record of 52-1-2 (35 knockouts) and he is ranked as the No.1 middleweight in the world. He suffered his only loss when he faced Floyd Mayweather Jr in 2013 (via majority decision, Mayweather vs Alvarez), since then Canelo has collected ten victories and one draw, facing twice Gennady Golovkin: both fights ended with a controversial decision, a split decision draw the first one (Saul Canelo Alvarez vs Gennady Golovkin I) and a majority decision win the second one (4-stars fight, Gennady Golovkin vs Saul Canelo Alvarez II); after this bout he has beat Rocky Fielding in the super middleweight division (Saul Canelo Alvarez vs Rocky Fielding) and Daniel Jacobs in the middleweights (Saul Canelo Alvarez vs Daniel Jacobs).
His opponent, the former Ibf, Wba and current WBO light-Hw champion Sergey Kovalev, has an official boxing record of 34-3-1 (29 KOs=85%) and he entered as the No.1 light heavyweight. He lost to Eleider Alvarez in 2018 (the Russian was ahead on points but he was knocked out in the seventh round, Sergey Kovalev vs Eleider Alvarez I) but then he has won the rematch (Eleider Alvarez vs Sergey Kovalev II) and he has also beat Anthony Yarde in 2019 (Sergey Kovalev vs Anthony Yarde). Canelo Alvarez vs Kovalev is valid for the WBO World light heavyweight title (Kovalev’s second defense). Watch the video and rate this fight!