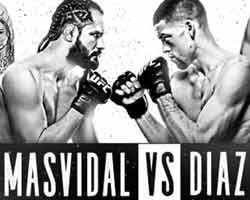 Review by AllTheBestFights.com: 2019-11-02, nice and tough fight between Jorge Masvidal and Nate Diaz: it is close to get four stars.

Jorge Masvidal entered this fight with a professional mma record of 34-13-0 (50% finishing rate) and he is ranked as the No.4 welterweight in the world (currently the #1 in this division is Kamaru Usman). He lost two consecutive bouts in 2017, against Demian Maia (via split decision, Maia vs Masvidal) and Stephen Thompson (Stephen Thompson vs Jorge Masvidal), but then he has beat Darren Till (Darren Till vs Jorge Masvidal) and Ben Askren (4-stars fight, Ben Askren vs Jorge Masvidal).
His opponent, the black belt in Brazilian jiu-jitsu and Tuf 5 Lw tournament winner Nate Diaz, has an official record of 20-11-0 (80% finishing rate) and he entered as the No.9 in the same weight class. He faced twice Conor McGregor in 2016 winning the first bout (Conor McGregor vs Nate Diaz I) but then he lost the rematch (Nate Diaz vs Conor McGregor II); after this bout he has fought just once in 2019 defeating Anthony Pettis (Anthony Pettis vs Nate Diaz). Masvidal vs Diaz is the main event of the UFC 244 and it is valid for the BMF title (“baddest motherf*cker”). Watch the video and rate this fight!