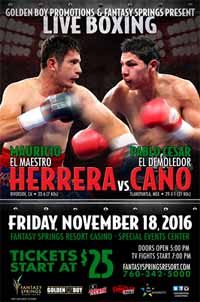 Review by AllTheBestFights.com: 2016-11-18, some good exchanges between Mauricio Herrera and Pablo Cesar Cano but it is not enough to get three stars: it gets two.

The former Wba intetim light-Ww champion Mauricio Herrera entered this fight with a pro boxing record of 22-6-0 (7 knockouts) and he is ranked as the No.25 super lightweight in the world but he lost two out of his last three bouts, against Jose Benavidez in 2014 (=Herrera vs Benavidez) and Frankie Gomez in 2016 (=Herrera vs Gomez). Between these two fights he had won over Henry Lundy (=Lundy vs Herrera).
His opponent, Pablo Cesar Cano, has a record of 29-5-1 (21 knockouts) and he entered as the No.29 super welterweight but he comes off the loss against Alan Sanchez (=Cano vs Sanchez). ‘El Maestro’ Herrera vs Cano is the main event of the evening. Watch the video and rate this fight!

Official video:
the fight Herrera vs Cano starts at 3:26:20