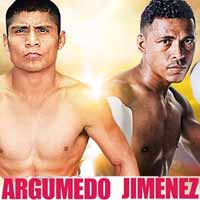 Review by AllTheBestFights.com: 2016-11-12, wild exchanges between Jose Argumedo and Jose Jimenez: it gets three stars.

The Ibf champion Jose Argumedo entered this fight with a record of 18-3-1 (10 knockouts) and he is ranked as the No.4 minimumweight in the world (currently the #1 in this division is Wanheng Menayothin). He lost to Carlos Velarde via split decision in 2014 but then he has won four fights beating Katsunari Takayama (=Takayama vs Argumedo) and Julio Mendoza in his last two.
His opponent, Jose Antonio Jimenez, has an official boxing record of 17-5-1 (7 knockouts) and he entered as the No.21 in the same weight class. He suffered his last defeat when he faced Ramon Garcia Hirales in 2013, since then he has collected seven victories and one draw. ‘Tecuala’ Argumedo vs Jimenez is valid for the IBF World minimumweight title (Argumedo’s second defense). Watch the video and rate this fight!