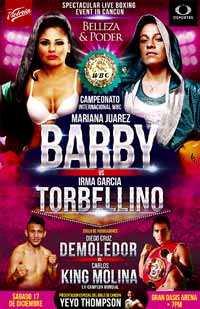 Review by AllTheBestFights.com: 2016-12-17, fight not particularly exciting between Carlos Molina and Diego Cruz: it gets two stars.

The former Ibf light-Mw champion Carlos Molina entered this fight with a pro record of 27-6-2 (8 knockouts) and he is ranked as the No.9 super welterweight in the world (currently the #1 in this division is Saul ‘Canelo’ Alvarez). He suffered his last loss when he faced Cornelius Bundrage in 2014 (=Molina vs Bundrage), since then he has won five bouts beating Carlos Gorham in his last one (=Molina vs Gorham).
His opponent, Diego Cruz, has an official boxing record of 17-3-1 (13 KOs=76%) and he entered as the No.48 welterweight. He lost to Reyes Sanchez last year but then he has collected four victories and one draw. ‘King’ Molina vs Cruz is on the undercard of Mariana Juarez vs Irma Garcia. Watch the video and rate this fight!