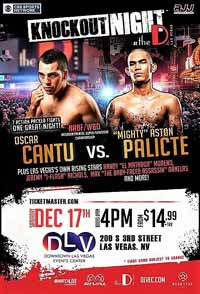 Review by AllTheBestFights.com: 2016-12-17, some good exchanges in the second part of the fight but it is not enough to get three stars: Oscar Cantu vs Aston Palicte gets two.

Aston Palicte entered this fight with a record of 21-2-0 (18 KOs=86%) and he is ranked as the No.20 super flyweight in the world while his opponent, the undefeated Oscar Cantu, has a perfect boxing record of 14-0-0 (1 knockout) and he entered as the No.48 in the same weight class. Palicte has fought twice in 2016 losing to Junior Granados and beating Vergilio Silvano while Cantu has fought and won once against Samuel Gutierrez. Palicte vs Cantu is valid for the vacant WBA-NABA, WBO Inter-Continental and NABF super flyweight titles. Watch the video and rate this fight!