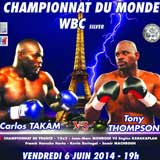 Review: 2014-06-06, some good combinations between Carlos Takam and Tony Thompson but it is not enough to get three stars. Carlos Takam entered this fight with a professional boxing record of 29-1-1 (23 KOs=79%) and he is ranked as the No.19 heavyweight in the world, he suffered his last loss in 2009 when he faced then-undefeated Gregory Tony, since then he has collected 11 wins and one draw in his last bout against Mike Perez (=Perez vs Takam).
His opponent, the 42-year-old Tony Thompson (9 years older than Takam), has an official record of 39-4-0 (26 knockouts) and he entered as the No.9 in the same weight class, he faced twice #1 Wladimir Klitschko but he lost in both fights (in 2008 and in 2012, Klitschko vs Thompson 2); Thompson has already fought in 2014 beating 2004 Olympic heavyweight gold medalist Odlanier Solis (via split decision Solis vs Thompson). Takam vs Thompson is valid for the vacant WBC Silver heavyweight title. Watch the video and rate this fight!