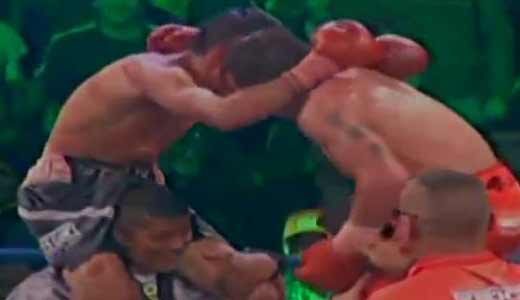 Review: 2014-06-06, exciting battle where the action never stopped thanks to an outstanding performance by both fighters and an awesome finish: Juan Carlos Reveco vs Felix Alvarado is one of the best boxing fights of the year and it gets four stars! Juan Carlos Reveco entered this fight with a pro boxing record of 33-1-0 (18 knockouts) and he is ranked as the No.5 flyweight in the world (currently the #1 in this division is Akira Yaegashi), he suffered his last defeat in 2007 when he faced Brahim Asloum, since then he has won 16 consecutive fights.
His opponent, Felix Alvarado, has a record of 18-1-0 (15 KOs=83%) and he entered as the No.25 light flyweight, he suffered his only loss in his last bout against then-undefeated Kazuto Ioka (Alvarado’s first world title shot, Ioka vs Alvarado). Reveco vs Alvarado is valid for the WBA World flyweight title (held by Reveco). Watch the video and rate this fight!