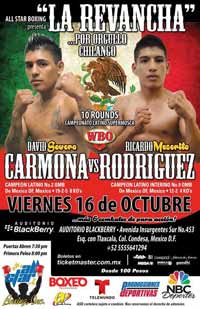 Review by AllTheBestFights.com: 2015-10-16, David Carmona vs Ricardo Rodriguez 2 gets three stars thanks to a good second part of the fight.

David Carmona entered this fight with a professional boxing record of 19-2-5 (8 knockouts) and he is ranked as the No.21 super flyweight in the world. He suffered his last loss in 2013 when he faced Omar Andres Narvaez (=Narvaez vs Carmona), since then he has collected three victories and one draw, against Warlito Parrenas in his last bout (=Carmona vs Parrenas).
His opponent, Ricardo Rodriguez, has an official record of 12-2-0 (4 knockouts) and he entered as the No.42 in the same weight class. He lost to David Carmona in their first fight but then he has won three consecutive bouts beating Daniel Lozano in his last one. ‘Severo’ Carmona vs Rodriguez 2 is valid for the WBO Latino super flyweight title. Watch the video and rate this fight!