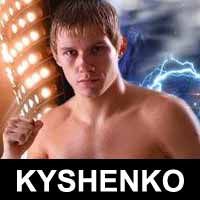 Review by AllTheBestFights.com: 2015-09-12, good fight between Artur Kyshenko and Cedric Tousch: it gets three stars.

Artur Kyshenko entered this fight with a pro kickboxing record of 60-12-1 (32 knockouts) and he is ranked as the No.3 super middleweight in the world. He suffered his last loss in 2014 when he faced Karapet Karapetyan, but after this fight he has won five consecutive bouts beating Dmitry Valent in his last one (=Kyshenko vs Valent).
His opponent, the undefeated Cedric Tousch, has a prefect record of 46-0-0 (32 knockouts) but he has not faced any notable opponents in his professional career. He has already fought three times in 2015 winning over Madani Rahmani, Omer Kocak and Mbamba Cauwenbergh. Kyshenko vs Tousch is the main event of It’s Fight Time 2. Watch the video and rate this fight!