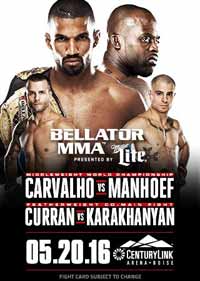 Review by AllTheBestFights.com: 2016-05-20, disappointing fight between Rafael Carvalho and Melvin Manhoef: it gets two stars.

The Bellator Mw champion Rafael Carvalho entered this fight with a professional mma record of 12-1-0 (83% ko/tko victory rate – he has never won by submission) and he is ranked as the No.18 middleweight in the world. He suffered his only loss at his pro mma debut in 2011, against Julio Cesar Araujo Fernandes, since then he has won 12 consecutive bouts beating Joe Schilling (=Schilling vs Carvalho) and Brandon Halsey in 2015 (=Halsey vs Carvalho).
His opponent, the 40-year-old Melvin Manhoef (11 years older than Carvalho) , has an official record of 30-12-1 (93% ko/tko victory rate – he has also never won by submission) and he entered as the No.42 in the same weight class. He lost two consecutive fights between 2014 and 2015, against Joe Schilling (=Manhoef vs Schilling) and Alexander Shlemenko (result overturned in a no-contest after the Russian tested positive for anabolic steroids, Shlemenko vs Manhoef), but then he defeated Hisaki Kato (=Kato vs Manhoef). Carvalho vs Manhoef, main event of the Bellator 155, is valid for the Bellator middleweight title (Carvalho’s first defense). Watch the video and rate this fight!

Their next fight: Rafael Carvalho vs Melvin Manhoef 2

Second part of the fight