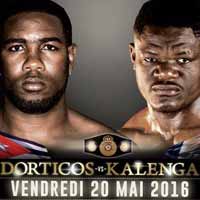 Review by AllTheBestFights.com: 2016-05-20, very nice and tough fight between Youri Kalenga and Yunier Dorticos: it gets three stars.

Youri Kayembre Kalenga entered this fight with a professional boxing record of 22-2-0 (15 knockouts) and he is ranked as the No.14 cruiserweight in the world. He fought twice last year losing to Denis Lebedev (=Lebedev vs Kalenga) and winning over Roberto Feliciano Bolonti (=Kalenga vs Bolonti).
His opponent, the undefeated Yunier Dorticos, has a perfect record of 20-0-0 (19 KOs=95%) and he entered as the No.18 in the same weight class. He also fought twice in 2015 beating Galen Brown and Fulgencio Zuniga. Kalenga vs Dorticos is valid for the vacant WBA World cruiserweight title. Watch the video and rate this fight!