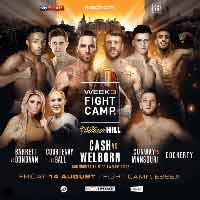 Review by AllTheBestFights.com: 2020-08-14, one sided fight between Felix Cash and Jason Welborn: it gets two stars.
The undefeated Felix Cash entered this fight with a perfect record of 12-0-0 (8 knockouts) and he is ranked as the No.27 middleweight in the world. In his last three bouts he has won over Stephen Danyo, Rasheed Abolaji and Jack Cullen.
His opponent, Jason Welborn, has a boxing record of 24-8-0 (7 knockouts) and he entered as the No.107 super welterweight but he comes off two consecutive losses, against James Metcalf in 2019 and Jarrett Hurd in 2018 (Jarrett Hurd vs Jason Welborn); before this bout, in 2018, he had beat twice Tommy Langford. Welborn vs Cash is valid for the Commonwealth (British Empire) middleweight title. Watch the video and rate this fight!

Report broken video
« 2020 BOXING fight – Jono Carroll vs Maxi Hughes – full fight Video
2020 MMA fight – John Dodson vs Merab Dvalishvili – fight Video UFC 252 »
HELP US!!! Since the CORONAVIRUS pandemic started, AllTheBestFights.com has struggled to survive! If you have enjoyed this website for the past 10 years, today we ask you for a little help: