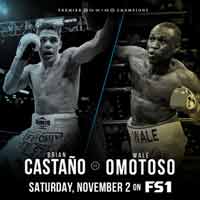 The undefeated former Wba light-Mw champion Brian Carlos Castano entered this fight with a pro boxing record of 15-0-1 (11 knockouts) and he is ranked as the No.7 super welterweight in the world (currently the #1 in this division is Jaime Munguia). The only man who stopped him in a draw was Erislandy Lara in March 2019 (Erislandy Lara vs Brian Carlos Castano), before this bout, in 2018, he had beat Cedric Vitu (Brian Carlos Castano vs Cedric Vitu).
His opponent, Wale Omotoso, has a record of 28-4-0 (22 KOs=79%) and he entered as the No.29 middleweight. He has already fought twice in 2019 losing to Chordale Booker and defeating Curtis Stevens (Curtis Stevens vs Wale Omotoso). Castano vs Omotoso is valid for the vacant WBO Inter-Continental super welterweight title. Watch the video and rate this fight!