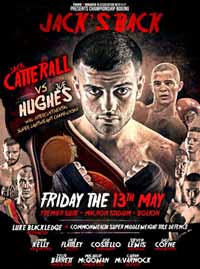 Review by AllTheBestFights.com: 2016-05-13, some good exchanges in the first part, but there was too much clinching in the second one: Jack Catterall vs Joe Hughes gets two stars.

The undefeated Jack Catterall entered this fight with a perfect boxing record of 14-0-0 (9 knockouts) and he is ranked as the No.16 super lightweight in the world while his opponent, Joe Hughes, has an official record of 14-1-0 (6 knockouts) and he entered as the No.89 in the same weight class. Both boxers have fought and won four times in 2015. Catterall vs Hughes is valid for the WBO Inter-Continental super lightweight title. Watch the video and rate this fight!