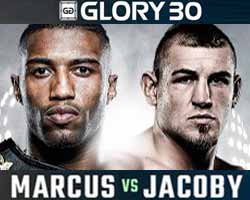 The former Wbc muay thai light-Hw champion Simon Marcus entered this fight with a professional kickboxing record of 43-2-2 (24 knockouts) and he is ranked as the No.1 cruiserweight in the world. He lost to Fang Bian last year but then he has collected three victories and one draw, winning the Glory Mw title in his last bout, against Artem Levin (=Levin vs Marcus 3).
His opponent, Dustin Jacoby, has an official record of 9-6-0 (8 KOs=89%) and he entered as the No.5 in the same weight class. He suffered five consecutive losses between 2013 and 2015 but then he has won five bouts defeating Wayne Barrett in his last one. Marcus vs Jacoby, main event of the Glory 30, is valid for the Glory middleweight title (Marcus’ first defense). Watch the video and rate this fight!

Alternative video – the fight Schilling vs Wilnis starts at 35:10