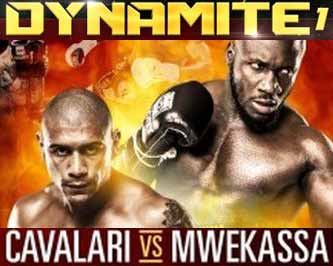 Review by AllTheBestFights.com: 2015-09-19, tough fight but not so exciting: Saulo Cavalari vs Zack Mwekassa 2 gets two stars.

Saulo Cavalari entered this fight with a professional kickboxing record of 31-3-0 (19 knockouts) and he is ranked as the No.2 super cruiserweight in the world. He suffered his last loss in 2014 when he faced Tyrone Spong (=Spong vs Cavalari) but after this bout he has won three fights beating Artem Vakhitov in his last one.
His opponent, Zack Mwekassa, has an official record of 13-2-0 (12 KOs=92%) and he entered as the No.7 in the same weight class. He lost to Saulo Cavalari last year (=Mwekassa vs Cavalari I) but he came back to win in 2015 defeating Carlos Brooks (=Mwekassa vs Brooks). Cavalari vs Mwekassa 2, main event of “Glory: Dynamite 1”, is valid for the vacant Glory light heavyweight title. Watch the video and rate this fight!